Stack of the White Rabbit Pulszentrale 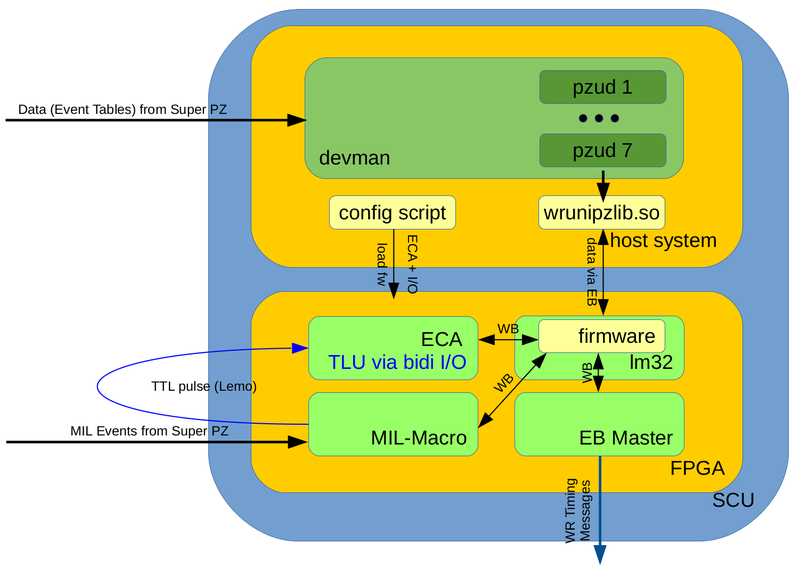 Figure: Overview on the White Rabbit Pulszentrale. Shown are SCU (blue box), host system and FPGA (orange boxes), standard IP cores instantiated in the FPGA (light green boxes), components by the WR-UNIPZ (yellow boxes) and components of the old GSI Control System (dark green boxes). Indicated is data flow from the Super Pulszentrale (thick black arrows), a Lemo cable (thin blue arrow), Wishbone and Etherbone communication (thin black arrows) and Timing Messages sent to the White Rabbit network (thick blue arrow). Details see text. One of the main challenges of this development was to bring together two different worlds: The old GSI Device Access control system and the very different ecosystem of the White Rabbit based developments. The low level interface to timing system components is Etherbone. The high level standard API is saftlib. However, WR UNIPZ uses a third approach, namely the use of a shared library. This disentangles the two distinct ecosystem as much as possible: Regular SCU The basis of WR-UNIPZ is a regular SCU as Frontend with Timing Receiver. Hardware, gateware and the RunTime Environment (RTE: drivers + tools) are identical to other frontends. This is configured and rolled-out like all other SCU based frontends. WR-UNIPZ: Firmware and Tools Very tightly coupled to the gateware is firmware and low-level software tools of WR UNIPZ that are hosted in the same source code control and build environment as gateware and RTE. It is part of the White Rabbit based ecosystem. The tools contain all a script and helper software to upload the firmware to a lm32 soft CPU embedded in the VHDL of the regular SCU during runtime. Moreover, the script performs basic configuration of firmware, IOs ports and the ECA. Configuration and roll-out works via nfs-init (as usual) and includes a shared library wrunipzlib.so as API. This shared library hides implementation details as much as possible from the user. Included as well is a CLI for testing and diagnosis. Precise timestamping needs to be done for the 'cycle start event' received from the SPZ via MIL bus. This is achieved by the Timestamp Latch Unit (TLU) of the ECA. The 'MIL Piggy' generates a TTL pulse on an output when the cycle start event is received. Via a LEMO cable, this TTL signal is connected to an input configured as TLU input of the ECA. This solution provides timestamping in hard real time by the gateware, indepently of the firmware. PZUD: Device Access Class The equipment class pzud is part of the Device Access environment and part of the equipment model pzu. pzud only uses the shared library wrunipzlib.so as the sole interface to the lm32 firmware in the FPGA. Basically, pzud can be seen as a wrapper around that shared library.

I (db) prefer the following workflow This workflow has two advantages: It allows me to work on my favorite working environment and assures a roll-out is done with sources that committed and pushed.

Rollout on a SCU in the ACO environment requires working on the ASL 7 cluster. There are two steps. First, rebuilding of binaries (firmware and CLI). Second, prepare 'nfsinit' for a specific SCU. Remark: There is no dedicated FPGA image, the gateway uses the default SCU image of the current release. The startup script (called during nfsinit) replaces the firmware of the user lm32 during run-time. For cloning the repo and setting up the toolchain just follow the instructions of the current release. Consider to follow the directions given here.

In case you are not familiar with Device Access and the build environment on the ASL >>> 6 <<< cluster, checkout this.

Some info on coding... pzud-device.cc provides some data and standard device properties USRs (User Service Routines) provide methods dedicated to PZUD only; USRs are defined in the file pzud.xml

Interface to the lm32 Firmware in the FPGA

There is only very little code implemented by PZUD. Basically, PZUD is just a wrapper around a shared library 'wrunipzlib.so'. This library provides the interface to the firmware including all communication. The library and headere file are provided here The Device Access class PZUD just includes the header and links against the shared library (see the info on 'SConscript' here).