Impressions about 'Meeting about Ionsource Roadmap' on December, 03rd 2020

General focus of the meeting

Purpose of the meeting was to get a common idea about the expected development state of the new Ionsource Application in the beginning and during the 2021 GSI beamtime.

Before the meeting Aleksey supplied a list of requirements very close to the following table. After discussing the question if really 'everything' in the list is needed, Aleksey underlined that for him all points of the list have equal and highest priority. (Martin: My interpretation is, that Aleksey wants as starting level an application, which can completely control an ion source without the need of the old Fortran or Swing application on the side). The following table is ordered by Martin (proposal), the ordering and prioritisation is not a result of the meeting. See above!

Aleksey and Gleb like the idea of a highly configurable dashboard layouts and following ideas in particular where discussed: For (non-expert) users controlling and monitoring the ion sources their was a common agreement that flexibility of layouts can be confusing and complicate operation. For Aleksey and Gleb this stands above the needs for an highly configurable dashboard. An agreement was reached defining that one layout for each ion source type will probably be sufficient. The layout is designed with the help of the ion source experts. The layout possibilities might have limits in terms of size, scalability and technical boundaries. The layout must be configurable in a way that expert input can be realized and the layouts can be progressively improved from time to time.

Aleksey presented an interesting form of laying out instruments in groups (or grouping boxes). Those groups are a form of abstraction/presentation of physical parameters of ion sources instead of only putting into focus the instruments of the involved devices. Additionally the grouped instruments are reduced to only show view elements which are really needed for the particular instrument. This approach makes the ion source easier to understand and control and also reduces the amount of space in total needed on the dashboard. Check the image to get an impression. 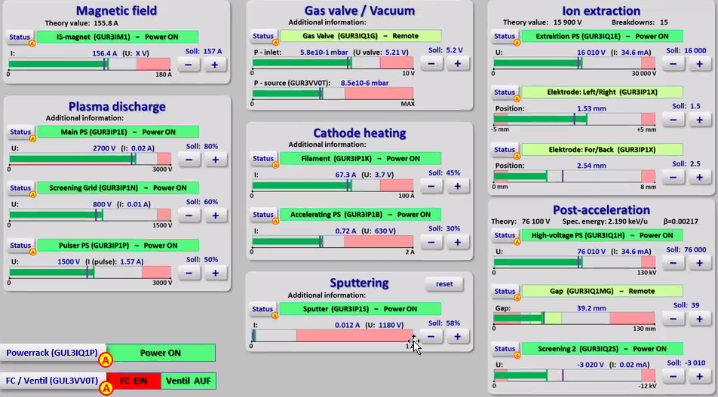