Git basic concepts and howto on the command line

Git is a distributed source code management system which means that multiple developers can work on the same project on their local machine without a network connection. Changes are then later synchronized to a central point using the push command. In our case the changes go to the gitea server. Most operations in git need only local files and resources to operate—generally no information is needed from another computer on your network for basic development. Important note: in git "commit" only means that you created the commit in your local repository, you also need to push the changes to the server explicitly. This synchronizes the local code changes and commit messages to the server. Otherwise no one else can see your changes. Collaboration with other team members only happens on pull (fetch) / push. This asynchronous workflow can lead to concurrent changes but since this is the key concept in git—it tries to minimize manual interaction and provide good tools. There are also some best practices that should be applied for a smoother experience: 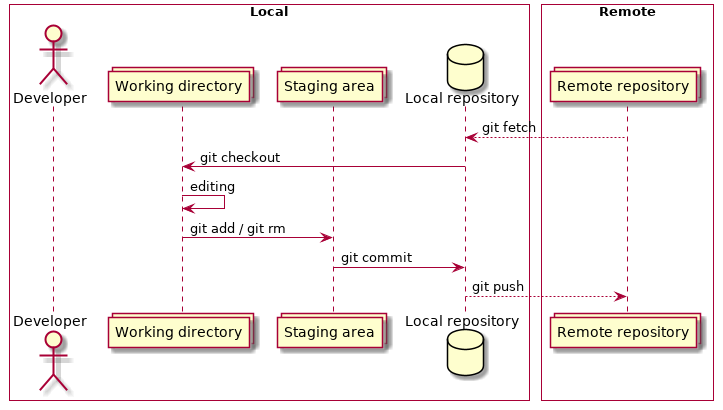 In git "revision numbers" work differently and are realized by the "commit hash". It is a calculated hash sum of the code and meta data like committer and date. From that commit hash no order is recognizable like from svn revision numbers. In most git commands you can specify "commit references" as arguments which can be git commit hashes like 4739319abf9070ef0b0e2a73224820ae70488aa6 (but usually you only have to specify about 7 characters for it to be unique, like 4739319) or special names like HEAD, which points to the most recent commit in the current branch.

Some commands to deal with the missing sequential order property

At the beginning it might be annoying that you can't use the revision ordering to simply find out if a commit is part of a given "revision". But here are some command that might help to get that information from a git repo.

A note on dates

The "author date" notes when this commit was originally made (i.e. when you finished the git commit). According to the docs of git commit, the author date could be overridden using the --date switch.

The "commit date" gets changed every time the commit is being modified, for example when rebasing the branch where the commit is in on another branch. -- https://stackoverflow.com/a/11857467/405793

It helps to bundle commits of small changes with specific descriptions.

It allows to: - easily track down the source of a problem when debugging because only associated changes are in that commit
- (cherry) pick specific features without "Beifang"
- revert faulty commits easily
- understand what has changed when pulling / merging / creating a release
- understand what might be the right choice when merging Seen in a bigger scope this also means "branch care". Have a branch for each feature, have a branch for each bug fix. With git it can be done easily.

In git you can create and commit a simple file called .gitignore to define files that should not be considered. Basically file patterns that work with "ls" can be used. For more information see: https://git-scm.com/docs/gitignore

Get a git repository

Where to find the repository url 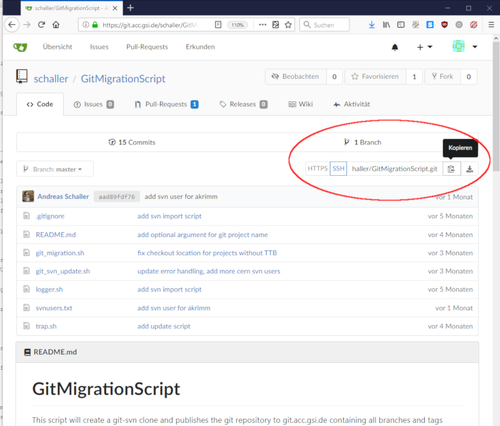 Note: All changes are only locally until you push. See https://git-scm.com/book/en/v2/Git-Basics-Undoing-Things#_undoing for more information.

A remote is a connection to another git repository like our gitea server.

Commits can be tagged and are also referable to by this name. Unlike svn nothing has to be copied.

In git you are always on a "branch". The default name of the main branch is master (like trunk in svn) but technically it is just a regular branch. Unlike svn nothing has to be copied to create a new branch, similar to tags it can almost be seen like a pointer to a commit.

A local "shelves" where you can store changes temporarily (even across branches).

An elaborate workflow when using git and releases: https://www.atlassian.com/git/tutorials/comparing-workflows/gitflow-workflow See the picture below the headline "Hotfix Branches" for a complete graphical representation.

A normal flow when cloning a repository and making a bugfix

Without making pull requests. Working on "master" and creating a "bugfix" branch to work with. Performing the bugfix In a project where pull-request via gitea are used, the feature branch is not manually merged to develop but after the push to the feature branch the process continue on the gitea website and merging works from the ui.

Git Cheatsheet https://www.atlassian.com/git/tutorials/atlassian-git-cheatsheet Try not to use rebase or force if you need a cheat sheet for it ;-)

You are not in the correct directory, you have to be in or below the directory containing the .git directory. Check with ls -la